The very frequent operation of the valve may lead to slight leakages through gland packing. Tighten the eye bolt nuts equally on both sides to stop the leakage. This sequence should be repeated a few more times. After a period of time you may have to add one or two more glands packing in the stuffing box. To add the gland packing rotates the hand wheel in anti-clockwise direction in full open position. All gate and globe valves are provided with back seating arrangement in full open position. Remove the eye bolt nuts, lift the gland bush and gland flange in upward direction and add the required nos. of gland packing.

When the valve is kept in service or in the store for considerably long time, as the gland packing is in compressed position for a long time, it loses its compressibility and becomes hard. It does not hold the pressure even after further tightening. At this stage there is no alternative than to replace the old packing with a new one.

The method of replacing gland packing is similar as described in 3 (a). Old gland packing should be removed by using angular scriber and replaced with new packing of correct size having open ends placed 180 with each other.

If the valve is installed in running pipeline, then precautions must be taken during replacement of gland packing under pressure. There should not be any leakage through gland when valve is in back seat position. In many cases back seat portion of spindle and bush get damaged due to hard foreign particles entering the pipeline and coming in contact with seat surface and back seat area during operation of valve. 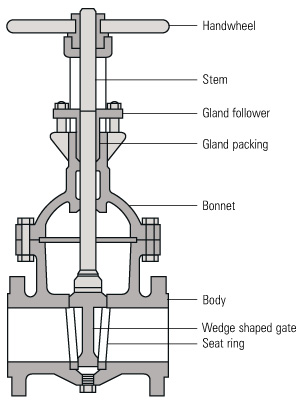 Cleanliness and Lubrication of Spindle

The spindle above gland packing area is always exposed to open atmosphere where a lot of dust and adverse weather conditions can damage the surface of spindle. For smooth operation of valve, threaded portion of spindle must be protected from dust and proper lubrication must be provided periodically. Grease should be applied by grease gun through the grease nipples provided for lubrication of yoke sleeve collar.

Normal life of the valve is designed for years together but there are some factors, which reduce the life of valve considerably. Improper storage, contamination of hard particles in the pipeline and lack of periodic maintenance can cause reduction in valve life considerably.